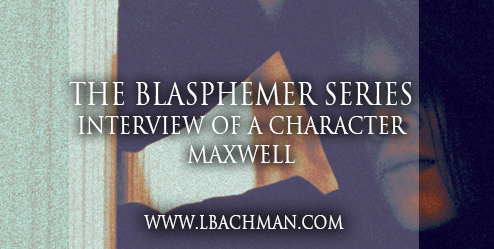 This particular interview has a history that it happened to be ‘found’ in the ‘archives’ from The Alexandrian vaults. It takes place after the first book published. No-one knows where it came from or who The Interviewer is.

The Interviewer: How do you feel about your story being chronicled for mass readers to get a hold of and read?

Maxwell: I think the story must be told. It’s an important endeavor to open your mind to a new possibly.

The Interviewer: What do you think of L. Bachman being the one to write your story and the stories of others?

Maxwell: She’s alright, she’s good people. I like her tattoos.

The Interviewer: Whatever happened to Eshu?

Maxwell: :chuckles: Gabriel took care of him about as much as someone like Eshu could be taken care of. You must understand Eshu is a guardian and a very powerful spiritual being. He learned his lesson, which is all I can say about that.

The Interviewer: What’s your biggest regret?

Maxwell: In the book, it’s listed as never getting to Lilith in time, but truth be it there is a bigger regret that I have and that is defying The Mother and The Father.

The Interviewer: You witnessed reincarnation first hand with following Lilith through her many lives, what were the best life and the worse that you saw her go through?

Maxwell: The worse life she lived I witnessed for a brief period was that of her as a child. You must think of things in the time frame of which they happened. At one time in history to be red haired was thought of as a bad thing, a sign of a witch. We all know that Witches come in all shapes, colors, backgrounds, and countries, but in this particular life she had been hidden away for a very long time. Her hair had been sooted and changed colors with dyes of the time. In the end, she had been murdered by a mob worried she was going to bring bad upon the land.

The best life she lived I can remember was that of peace. She was in Scotland living on the outskirts. Her hovel overlooked a valley and a river. It was quiet and peaceful. Sadly, like most of her lives she had either been killed or died tragically in ways I couldn’t do anything about. In this one, she had gotten sick and died. I couldn’t heal her. When she saw me for the smallest of moments I could swear she recognized me, but by the time I had gotten to her she had been sick for a very long time. I still don’t know what she died of.

The Interviewer: We only get a taste of a few of her lives, can you elaborate on others? Why is it so hard for you to find her? The compass worked in the published account why not just do that earlier?

Maxwell: She had been a male in several lives, a warrior or soldier that led to her death in those lives. She had been just about anything you could be, must remember she had been around a very…very long time. A monk, a cult leader, a housewife, and even a school teacher are a few that are coming to mind. She’s been every color variation, a wide range of ages in her lives, and involved in most religions.

I simply hadn’t thought about making a compass, the idea never came to mind until later years after struggling for many lifetimes of never finding her. I had my own struggles as well giving me problems and diverting me. Goodwitch Anya also found out about me and contacted me. Things went smoother after that.

The Interviewer: Have you spent more time on Earth since the book has been released?

The Interviewer: Your Enochian tattoos, how do they work? I’ve read that some, that got early copies of the story, wished they had a compass like yours.

Maxwell: :chuckles: Yes, I can see how a compass would work for many. Simply having something right there literally on your hand pointing you to whomever or whatever you need. I can’t begin reveal the magic of my etchings, I got in trouble once before for sharing too much knowledge with mankind.

The Interviewer: Is there anything you wish could’ve left into the story that was taken out?

Maxwell: The story written was specific, it was to launch a series that would talk and discuss many other lives and others stories. This one was specific to me finding Lilith, but I have plenty of stories. Perhaps she’ll write them down as well in a book for others. I have dealt with Raphaim, Canaanites, and have stories upon stories I’d love to share.

The Interviewer: What do you see happening with The Blasphemer Series?

Maxwell: There is a great evil coming. There are many stories to tell.