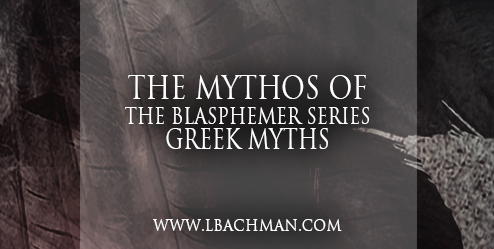 I wrote a book entitled Harvest, the second installment of The Blasphemer Series. This book introduces the reader to The Seers and the world of oracles. Dante, Imogene, and Briar are the three main living seers. Dante has visions of the past, Briar sees the future, and Imogene is the tormented seer of the present. Each has its gifts and curses that come with its inherited talents.

The story takes you through this journey with Dante, a famous painter that was never aware that the paintings he was creating were paintings depicting scenes from the past. Hannibal comes back in this book as it closely tied him to Dante and his family. Introducing Hannibal on a more personal level than readers meet him in book one, Maxwell Demon.

Writing this book was vital. I had many ideas for it before even creating the first book. Originally, Harvest was to be the first book, but after long debate and re-writing plots and storylines, it made sense to come second introducing the series properly with Maxwell.

Oracles inspired the Seers. The Greek and Roman myths inspired this. Oracles were, in ancient times, women chosen by the gods through which they would spoke divine advice to them. It is said people would make pilgrimages to see them, emperors kept them close, and were some of the most important people relating to tales. With this inspiration, I knew I wanted to place this in a modern setting. With Imogene and Briar being typical for oracles, Dante is not.

There are scenes in the book that show he is not alone in this. This was inherited through his grandfather’s line and is hinted that Dante’s father was gifted with ‘seeing’, but he was like Imogene and couldn’t handle it. I clarified that Dante’s father might have had Imogene’s gift. Throughout the series’ history, many seers are alive with some rogue bloodlines popping up, and there is no simple answer how many are truly alive during the writing of this series, but what is known are the three main ones.

If you dig enough with research, you can also start finding that seers and oracles weren’t strictly of Greek and Roman origin. Some other examples are the Norse, the Igbo people of southeastern Nigeria in Africa, and even in Celtic polytheism. Though I originally didn’t know of some origins as a youth and developing ideas for the series I was deep into the Greek and Roman mythologies and that is where my inspirations came from. It influenced a scene in the book where they see the spirits of seers that have died.

Dante being a seer is vital to the future of the series. The Blood of Seers is also a key plot point throughout the seers as well. At the end of Ghosts, the currently being written installment expands on this future, you see how powerful a seer can be. Bloodlines are important. What it can do, how it can mold destiny, and even how it can curse you. This is an idea that is introduced in the book Maxwell Demon with Anya feeling family is so important. Ghosts also introduces an ancient helper of hers.

I enjoyed playing on the idea of how we can be blind to our pasts or refuse to see them. This is partial why he ‘zones out’ into his gift. What happens to him from the outside is described by Imogene who witnesses his gift first hand when it occurs. He is out of control of his gift, it comes and goes whenever it pleases as if it is its own entity. His gift possesses him, in a way.

Imogene is tormented by her gift. She sees it as a curse and because of this feeling she escapes with alcoholism. She explains, roughly, that being able to hear everyone’s thoughts all the time is overwhelming. It has ruined her life more than improved it according to her. I had read other books and seen movies that showed being someone gifted with mind-reading as amazing but rarely talking about all the horrible side-effects. You see her sobering up in the book realizing she has to stand-up to her struggles even if it kills her to help. She deep down genuinely cares about those around her, but she’s become hardened by a lifetime of hearing thoughts that others think are secret. Her gift is a touch overlapping with Briars with knowing with things are coming, but it’s only due to the ability of someone to think before doing. Briar can see the future even before someone conceives the action or thought to act upon.

Though Briar’s gift is unique and can at times overlap with Imogene, she isn’t as tortured. I cut her origins from the original book. The Lost Bishop was an entire chapter I removed for storyline progression. Briar’s backstory is that her mother was killed during childbirth. Her father knowing her mother was a Bishop and what they were/are she was blamed for her mother’s death. The years made him bitter toward her and abusive until she ran away, thus the lost part of the Lost Bishop.

Being able to see the future she has been able to avoid what she perceived as danger and stay hidden without being aware she was hidden. She did have a friend that ran away with her, Mr. Waters, but he never showed up in the storyline since that chapter so it made more sense to remove the chapter.

Upon being ‘found’ she went to one haven for the different Anya ran for the young with gifts. The more I wrote the chapter the more it felt like something that deserved a book of its own or at least drawn out differently.

At first, she is unaware of her gift, but when she realizes it she’s frustrated by it. I cut a scene from the original manuscript during self-editing It described how frustrating it can be to see images in her mind and not being able to explain it. She even expresses jealousy of how the other two seers have gifts beyond ‘the seeing’ to help describe their visions. By the end of the book, her gift is used against her. A dark entity that stalked Imogene as a child sees opportunity in Briar. This is future detailed in the book Ghosts.

You can begin reading the series and check out more information by following the link: Down the rabbit hole

Is this interesting? Enjoying the series as it begins? Let me know! Is there something more you’d like to know? Let’s start a conversation.