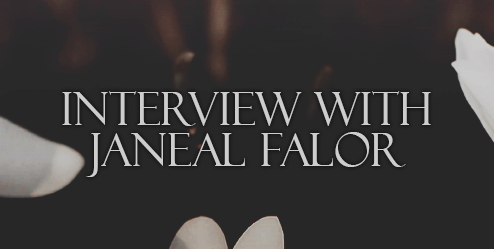 Bachman: You are best known for being a fantasy romance author with your Mine series, do you have any plans to change genres?

Falor: For a few years, I’ve played around writing some sweet romances, but have never been serious about them. Mostly I’ve been practicing writing them and learning the genre. I’m finally getting serious about publishing some, probably within the next year or so, but under the pen name of Jane Danforth. Under my own name, I’ll probably stick with fantasy with a side of romance. Getting lost in fantasy worlds is my favorite, with kissing of course!

Bachman: Is there anything you’re working on now you can share with us?

Falor: Yes! It’s the first book in a brand new series, The Fading Oracle. Aira, the last oracle, sees a vision of losing her powers and must fight to stop that from happening. Did I mention there are dragon gods? And a hunky love interest, of course!

It’s written, but still needs to go through some editing. I’d also like to plot out the rest of the series before I release it, just in case I need to tweak anything in this first book.

Bachman: You mentioned a box set, what can you tell us about the story you wrote that’s included?

For those familiar with the Mine series, the book, Mine to Defy, is about Tawny, a Princess from another country who came to help those struggling in the Mine series. She became a tarnished in the last book, forced to become bald, had her face tattooed, and made barren. This story takes place as this princess returns to her country and to a people that aren’t ready for what she’s become. She discovers a plot against the tarnished, and fights to save those like her, discovering herself in the process. And finds love along the way, because I love kissing books!

Bachman: When we talked you named other authors, what about these authors did you like that made you want to work with them?

Falor: J.A. Culican is putting the set together. She’s a great, USA Today Bestselling author with some cool books out! When I found out she was putting together a fantasy box set, I was excited to become part of it and hopefully learn some new skills from her.

Bachman: What’s the box set going to be called?

Bachman: Will it be primarily a romance box set?

Falor: It will be a fantasy box set. I know that my book has some romance in it, because kissing rocks, but fantasy is the main genre.

Bachman: When you’re not writing, what do you do to entertain yourself?

Falor: I listen to a lot of audiobooks. I also love to garden, though I’m mostly good at killing plants and not making them grow. And as long as I don’t have to cook, I really enjoy spending time in the kitchen.

Bachman: You’ve been writing for some time now, any advice you’d like to share to someone just coming into the business?

Falor: Write. A lot. I know it may sound silly, but often writers want to write, but we get caught up in doing so many other things, sometimes we forget the main point is to actually write. While you’re writing a lot, read even more. There’s so much we can learn from reading other books, not plagiarizing them, but discovering what you like and don’t like about them, and then applying that to your writing in your own way.

Thank you for having me!